Hello Friends !! How are you ........There is a great news that now Google is using a new search algorithm "HummingBird".
On the  Google's 15th birthday, Hummingbird is the major change to the inner workings of the world's most popular search engine since Google's "Caffeine" update in 2010, which sped up Google's indexing of sites and delivery of search results.Firstly, you should know that what is search Algorithm .I am providing you full tutorial about Search Algorithm. 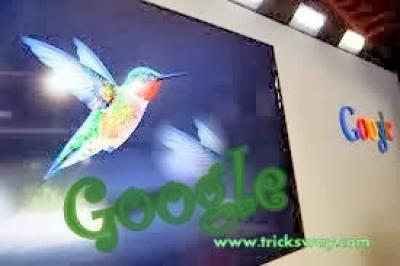 Ans: It is a technical term for what you can think of as a procedure that Google uses to sort through the billions of web pages and other information it has, in order to return what it believes are the best answers.It is basically used to search better at answering longer, more complex queries.

Ans: It’s the name of the new search algorithm that is used by Google for better results.It's name comes from being “precise and fast.”Hummingbird looks at PageRank — how important links to a page are thought to be — along with some other factors such as : whether Google believes to be a page is of good quality, the words used on it and many other things.

Q)When did Hummingbird start? Is it Today?

Ans: No,Google started using Hummingbird about a month ago, it said. Google only announced the change on it's 15th Birthday i.e. 27th of september.
Q)What does it mean that Hummingbird is now being used?Ans: Just giving you an example for easy understanding. Consider a car built in the 1950s. It might have a great engine, but it might also be an engine that lacks things like fuel injection or be unable to use unleaded fuel. When Google go for Hummingbird, it’s as if it dropped the old engine out of a car and put in a new one. It also did this so quickly that no one really noticed the switch.

Q) Will It really work?

Ans: Unluckily, it's very difficult to do before and after comparisons,  as Google has pushed out the Hummingbird update over the last month without any public declarations.For the moment, we only have Google's word that Hummingbird will make a difference, although it gave a some examples of searches that could make some advantage from the new algorithm.As example, a search for "pizza hut" algo used before Hummingbird produced sites with lists of drugs, but now brings up search results with "more information" about pizza hut from nearest your location  in general.

Q) Could it be making Google worse?

Ans: No,absolutely not. While we can’t say that Google’s gotten better, we  know that Hummingbird ; if it has been used for the past month.It hasn’t sparked any wave of consumers complaining that Google’s results suddenly got bad. People complain when things get worse; they generally don’t notice when things improve.

Q)Does this mean I’m going to lose traffic from Google?

Ans: By and large, there’s been no major clamor among publishers that they have lost rankings. This seems to support Google saying this is very much a query-by-query effect, one that may improve particular searches .This is done particularly on complex ones rather than something that hits “head” terms that can, in turn, cause major traffic shifts.If you haven’t in the past month, well, you came through Hummingbird unscathed. After all, it went live about a month ago. If you were going to have problems with it, you would have known by now.

How to watch Torrent Videos without Downloading – Stream with Roxplayer .