Google's Text-to-Speech  app will soon release its update with some user interface tweaks and enhanced voice quality, as the signed-APK file has emerged online.

Google Text-to-speech app Engine powers applications to read the text on your screen loudly.It can be used by:
• Google Play Books to “Read Aloud” your favorite book
• Google Translate to speak translations aloud so that you can hear pronunciation
• TalkBack applications for spoken feedback across your device

The Google Text-to-Speech app v3.0,  which will release on the Google Play Store shortly, will ensure high quality voice support. This feature has not yet been official detailed, but from the file size of the high quality voice downloads, which has jumped from roughly 6MB to more than 200MB, we can assume some effective and major changes have been made. The female English UK voice file is the biggest, at 276MB.

Android Police has published a video detailing some differences between the old and new versions of in the English (US) language pack, along with a demo of high quality English (UK). The new versions have a more natural sound than the previous more high-pitched,robotic ones. 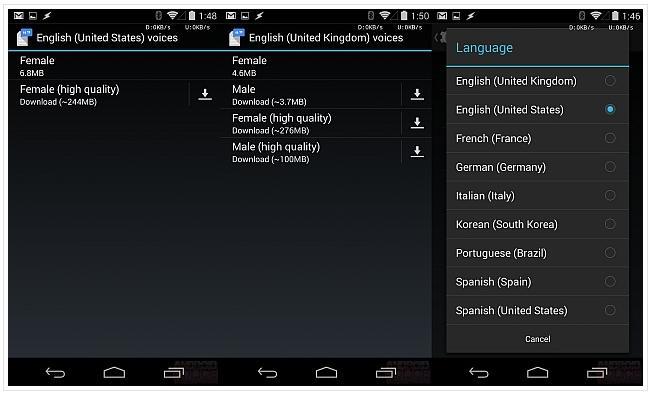 Upon testing the new versions of Google TTS,may be it take few extra seconds to process the voice.
The new update of Google Text-to-speech app also adds support for two new languages - Portuguese (Brazil) and Spanish (US).

The publication also released a few screenshots of the app, which revealed the language's 'Delete' button being replaced by a trashcan icon, along with the display of the language's file size.

You can manually install the Google Text-To-Speech 3.0v via APK files from here :