This is the great news for Android users that Android became the No. 1 as Android tablet OS market share is the highest in 2013 since Apple started the business in the field of tablet, with almost 62 percent of the business is covered by it. According to research firm Gartner ,sales of tablets all over the world reached to 195.4 million units in 2013, a 68 percent increase on 2012.

"In 2013, tablets became a main point of sales in the market with a huge recommendation of Android-based tablets by the users being within the budget of mainstream consumers while still offering adequate specifications. "As the Android tablet market becomes highly productive, in 2014, it will be critical for vendors to focus on device experience and meaningful technology and also on the quality in reasonable price value to ensure brand loyalty and improved margins and increase market."

In 2013, the share of Apple's i-OS decreased to 16.8 percent as more people looked at smaller low-cost tablets in growing markets. In growing markets, the growth was as high as 145 per cent, while mature markets grew 31 percent. "Apple's tablets remain strong in the higher end of the market and, Apple's approach will continue to force vendors to compete with full ecosystem offerings, as  i-Pad mini sees a greater share”, added Cozza. 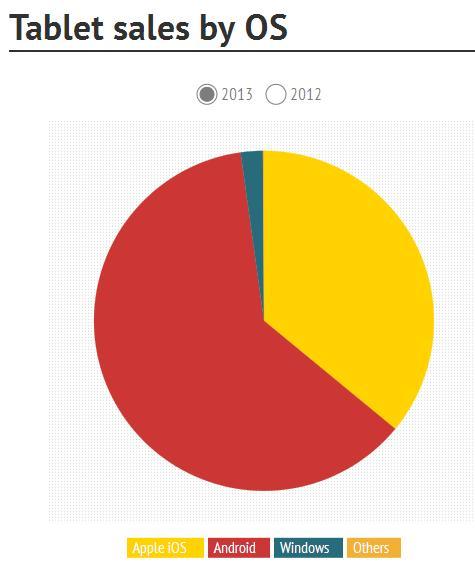 Microsoft's tablet market improved but at a low base.To compete, Microsoft needs to create reasonable proposition for consumers and developers across all mobile devices because in today's world, tablets and smartphones become key devices for delivering applications.

From a vendor perspective, Apple's strong fourth quarter helped it maintain the top position with around 36% market share, compared to Samsung’s 19%. Samsung, however, recorded a 336 percent growth. Lenovo did particularly well in 2013 with tablet sales growing 198 percent.

How to recover files from crashed windows